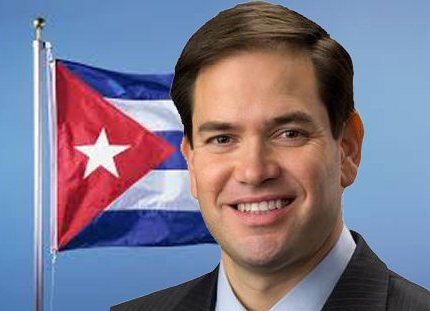 Cuban Citizen at Birth Marco Rubio Is NOT Constitutionally Eligible

Fill out the Online Petition

A PETITION FROM THE UNDERSIGNED

Recognizing that Marco Rubio is NOT a “natural born Citizen” of the United States and is NOT constitutionally eligible to be President or Vice-President.

Whereas Marco Rubio was not alive at the time of the adoption of the U.S. Constitution and cannot avail himself of the “grandfather clause” therein available to only the original “Citizens” and therefore has to meet the more restrictive “natural born Citizen” clause;

Whereas the founders and framers considered in the summer of 1787 in an early draft of the Constitution the term requiring the President to be simply only a “Citizen”, and then per Alexander Hamilton’s suggestions he proposed strengthening the requirement a bit more by requiring the person who would be a future President be “born a Citizen” for the presidential eligibility clause, the framers did not adopt either of those less restrictive citizenship terms as strong enough protection against “foreign influence”, but required instead at the written letter suggestion by John Jay (who became the 1st U.S. Supreme Court Chief Justice) to George Washington that the future Presidents had to be a “natural born Citizen” to be the President and Commander in Chief as a “strong check” against “foreign influence” by birth upon a future President and Commander in Chief once the founding generation had passed;

Whereas the term “natural born Citizen”, as that term appears in Article II, Section 1, Clause 5 is not specifically defined in the Constitution of the United States (since the Constitution does not include a glossary but was written in commonly understood language of that time as was explained in the Federalist Papers using language and terms that were clearly understood by them and the people of the USA who were called upon to adopt and ratify it), and thus we must look elsewhere outside the Constitution to what the people of founding and framing era understood said “natural born Citizen” term to mean (as such direction to do so is mentioned in the U.S. Supreme Court Case of (1875) Minor v Happersett), in order to determine its “originalist” meaning to those that chose that term and those that voted for and adopted and ratified the U.S. Constitution;

Whereas the Laws of Nature and Natural Law as evidenced by the Preamble of our Declaration of Independence strongly influenced our revolution and break away from England and the writing of our founding documents;

Whereas, per the preeminent legal treatise much read by the founders and framers, the “Principles of Natural Law” by Emer de Vattel (1758/1775/1797) and the colonial common law familiar to the founders and framers, they and the people of the founding and framing era understood that a “natural born Citizen” was a person born in the country to parents who were BOTH Citizens (born or naturalized Citizens as long as they are both Citizens) of the country when their child was born in the country, and that term was chosen as a future national security clause as a “strong check” against “foreign influence” by or at birth on the person who would be eligible to be President and Commander in Chief of our military forces once the founding generation had passed;

Whereas that Natural Law definition provided by Vattel’s founding era legal treatise was cited in the U.S. Supreme Court “Venus” case decision of 1814 in the citizenship discussion in that case as the best on citizenship and was quoted in that case, and that a person born in the country to parents who were both citizens (born or naturalized) when their child was born in the country were the facts at birth conferring “natural born Citizenship” on a person was cited in several subsequent U.S. Supreme Court decisions including Perkins v Elg, 307, U.S. 325 (1939) when the citizenship status of a party to a case was a key matter in determining a case before that court;

Whereas whiles Cuba is a neighboring country and diplomatic relationships are currently being restored with it, Cuba has in the past been a very hostile neighbor, Cuba is a foreign country and is not part of the United States or its territorial jurisdictions;

Whereas because Marco Rubio was born in the United States to non-U.S. Citizen Cuban parents, that said Marco Rubio was thus born with dual-Citizenship, i.e., a “Citizen” of the United States due to his place of birth in the USA under generally interpreted jus soli rulings of the U.S. Supreme Court re the 14th Amendment of the U.S. Constitution, he was also born with “Cuban Citizenship at Birth”, which he inherited from his Cuban father and mother via jus sanguinis Laws of Nature and the Constitution and Laws of Cuba;

Whereas Marco Rubio was born a Citizen of two sovereign countries and thus has birth allegiance to two countries at birth, he was thus born with “foreign influence” upon himself via citizenship at birth of more than one country and thus he was born with dual foreign allegiances, and has divided allegiances and national loyalties at and by birth, exactly what the founders and framers did NOT want for the person who would be President and Commander in Chief of our military forces in the future after the founding generation, the original “Citizens”, had passed away;

Therefore, be it declared by the undersigned;

That Marco Rubio is NOT a “natural born Citizen” under Article II, Section 1, Clause 5 of the Constitution of the United States and is NOT constitutionally eligible to be President or Vice-President.

If [YES] Checked Fill In Number of Pages of Signatures Attached: [   ]

For additional information about the history of the founders and framers selection of the term “natural born Citizen” for inclusion in the presidential eligibility clause in Article II of our U.S. Constitution and the U.S. Supreme Court legal case law re who is a “natural born Citizen”, and thus further detailing why Marco Rubio is NOT a “natural born Citizen”, read the information at the following websites: http://www.art2superpac.com/issues.html and https://cdrkerchner.wordpress.com/2011/05/27/senator-marco-rubios-lack-of-natural-born-citizenship-update-27-may-2011-see-pdf-copy-of-the-sep-1975-petition-for-naturalization-for-mario-rubio-father-of-senator-marco-rubio-who-was-born-in-may/

Download a Copy and Hand Them Out and Sign and Mail Copies to Your Elected Officials and Media People Who Need to be Educated on the Truth.

This article and petition is a statement of the facts, and is not meant to, or intended to, be interpreted as a political endorsement, or lack thereof, of any political candidate. WOBC takes no political point of view whatsoever.